When I reach to the edge of the universe
I do so knowing that along some paths of cosmic discovery
There are times when, at least for now,
One must be content to love the questions themselves

Symphony of Science is a YouTube channel where they mix awe-inspiring images with vocalized texts. It’s a bit hard to explain but easy to understand. Watch this:

If you develop web apps, you have encountered java.lang.OutOfMemoryError: PermGen.

Nikita Salnikov-tarnovski wrote an excellent article where these come from and how to solve them: Busting PermGen Myths

When I read “Britain’s share of the global music market is higher than ever” (source) and “We can only realise this potential if we have a strong domestic copyright”, I can’t help but wonder: Isn’t the industry so successful because they have the today’s laws?

Software has bugs – there simply is no way to avoid them. If you can’t avoid them, maybe you can handle them efficiently? Yes, you can: 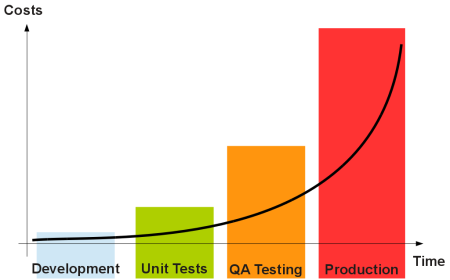 As you can see, the cost of fixing bugs rises as time passes. Why is that?

There are many reasons:

This also explains why unit testing is so much more efficient to QA testing for many kinds of bugs: It simply catches them before they spread their bad influence.

So fix your bugs early, OK?

CBI or Taking The Pain out of Eclipse Builds

When a project is young and dashing, mistakes are made. The PDE build process is such a mistake. If you ever tried to build Eclipse (or at least some of the older parts), then you know that this is brittle and the error messages are more like mysterious ramblings of an angry deity than helpful.

Enter stage CBI. From the FAQ:

The CBI build of the Eclipse platform is intended to produce the same output as the PDE build, and thus facilitate packaging without noticeable change. The noticeable difference the CBI build of the platform makes is ease of use to build the platform. For example, the prototype has consistently demonstrated that a newcomer without prior experience can build the Eclipse platform with under 30 minutes of effort on a machine with a supported JDK & Maven.

What can I say?

If you want to see what’s possible in today’s browsers, go to Chrome Experiments.

Hello and welcome to a new series of blogs called “Designing DSLs” or DDSL for short. If you have used or designed a DSL before, then you’ll know that there are a couple of pitfalls. This blog series aims to provide tips how to build “great” DSLs – whatever that might be 😉

What are the most common pitfalls for designers of DSLs?

Why is it so hard to design a great DSL? They should be simple, right?

Well, as Einstein (“Everything should be made as simple as possible, but no simpler“) and Blaise Pascal (“I would have written a shorter letter, but I did not have the time.“) already knew, it’s always easy to make something complicated – simplicity is hard.

On top of that, every mathematical system is either incomplete or inconsistent. And let’s not forget that each DSL is a model, too. And as you might know, all models are wrong but some are useful.

Should we abandon all hope? No. Just always remember that a good DSL is hard work.

First, a general tip: Look at existing examples. There are thousands of examples out there; use them. Knowing several programming languages yourself is a big bonus (everyone should know more than two languages).

“Wait a minute,” I hear you ask, “these are real programming languages!” So? A lot of brainpower went into designing them (or working around shortcomings), which makes them a great source of inspiration. Bonus: A lot of people know these languages which gives you a larger audience to discuss ideas (as opposed to the 3-4 people who will use your DSL in the beginning).