Everyone always argues “we need a strong copyright to protect the authors and their work” (here, for example). Frankly, I’m very suspicious how many authors are in this “we”. Usually, this “we” includes publishers, lawyers and people living off the work of authors but rarely those who actually do the work.

Just two days ago, I stumbled over an article (German) that compared the book market in England and Germany around 1800. The time is interesting because Germany had no copyright before 1837 and England had one for almost a century by that time. Of course, everyone in Germany was arguing that authors were starving and they needed a stronger copyright – just like England.

Before these copyright laws were enacted, the book market in Germany was between five to ten times bigger than that of England. A book in England would cost as much as you’d make in a week – between $500 and $1000 today. As a consequence, only very few people had books. In Germany, everyone could afford books. In 1800, only 700 news books were published in rich England while in poor Germany, they had 4000. They were cheap. Since only a few people could afford the expensive English books, print runs were tiny. A “successful” book would means a print run of 500 to 750. Reprinting was outlawed, so as soon as a book went out of print, it wasn’t available anymore. And who would reprint something that sold only 700 times?

And, surprisingly, the authors could live from their work. Around 1810, the author of a monograph could make 25% to 50% of a year’s income. In England, bestsellers got more but there are only a few bestsellers. It’s nice that 5 or 10 of the most successful authors make millions but isn’t it better when most people make enough for a living? 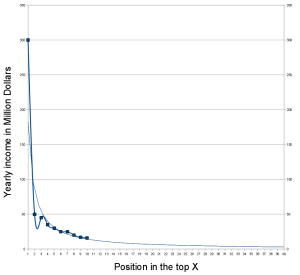 Yearly income of the most successful authors 2008

Why did that happen?

Because so many books were printed. Publishers always needed new material, so the authors were in a position of power. Also, “unsuccessful” books sold many thousand times. Publishers also had to keep them in print (as long as it was reasonable) to keep reprinters at bay. With a strong copyright, authors had to beg to be published (except for the few successful ones). Guess what that meant for income.

What happens today? Anyone can publish. Google has written software that collects interesting bits of information all over the globe and presents them in a nice, accessible way. Suddenly, the publishers cry out: “We need a stronger copyright.” I bet they do. But I don’t buy it when they add “to protect the rights of our authors.”

Which rights? The ones they take away with slave contracts? “Author gets 4% of the price printed on the book and publisher gets the right to publish the work in any way, forever.”

How many authors do you know which made a fortune from their books? Name five. King. Rowling. Patterson. Clancy (doesn’t even have a web site; poor guy only makes $35 Million/year). Steel. (Source)

Penguin sells books for £786 Million/year. This weeks bestseller in “Stolen” by Lesley Pearse. Amazon rank  118. I wonder how much of the $780m Ms. Pearse makes.

The next time someone tries to sell you that the copyright is good for authors, you know they’re lying.

This entry was posted on Tuesday, August 17th, 2010 at 21:23 and is filed under Comment, Writing. You can follow any responses to this entry through the RSS 2.0 feed. You can leave a response, or trackback from your own site.